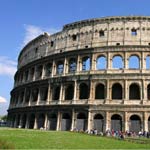 The capital of Italy often named “The Eternal City” is located in the Lazio region and was built on seven hills.
The city is one of the most important tourism destinations in the world due to its richness of archeological sites, monuments, traditions, contemporary art, museums and art galleries. The Vatican museum and the Colosseum are the most popular amongst visitors, but there is so much more to see – from pilgrimage to football with two great teams – AS Roma and Lazio.
The Romans always say “A lifetime isn’t enough to visit all Rome” 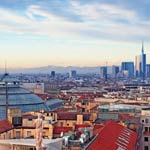 Milan Is the main industrial, commercial and financial city in Italy. The city is one of the first in the world for fashion and design, has the fourth largest cathedral in the world – il ‘Duomo’ and home to one of the world’s best football teams – A.C. Milan. Milan hosts several international tradeshows yearly, such as Milan Fashion Week, the Milan Furniture Fair and hosted world’s largest fair EXPO 2015.
Lake Garda The largest lake in Italy, located in the north and halfway between Verona and Brescia and in between Venice and Milan. The lake has five main islands, the Alps in the north and ancient town of Sirmione in the south. It is a popular destination with its numerous restaurants, bars, markets, boat trips and the fun park ‘Gardaland’.
Lake Maggiore The second largest lake in Italy, located on the south side of the Alps in the Lombardy region and bordering with Switzerland. The climate is mild both in summer and in winter. A lot of people from Milan spend their weekends here as the lake offers a variety of choice between beautiful nature, parks, museum, water sports and much more.
Lake Como The third largest lake in Italy and one of the deepest in Europe. Lake Como is a very famous retreat for wealthy people and has been since the roman times. George Clooney, Sir Richard Branson, Gianni Versace and Guinness all have their luxury villas here, to name a few. It is a popular destination and will even please the most ‘demanding’ guest. 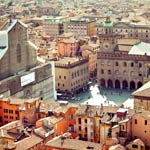 Bologna Located in the Emilia Romagna region and home of the world’s oldest University dating back to 1088. Well known for its two Towers which one can visit along with the arcades that run along the city. This ancient city is one of the most important hubs of communication in north Italy, all trains pass via Bologna going from north to south and vice versa. The city offers a variety of culture, churches, art, food markets, designer clothes, motor sports and their famous pasta dish – homemade ‘Tortellini’ with Ragu (Meat sauce).
Parma Located north of Bologna in the same region and is the most famous for its “prosciutto di parma” (parma ham) but also for parmigiano cheese, architecture, music and surrounding countryside. Parma is also well known for its two food multinational companies – Barilla and Parmalat, with food tourism sector represented by Parma Golosa and Food Valley. 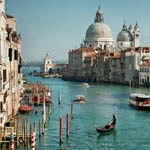 Venice is one of the most beautiful cities in the world surrounded by canals, history and art. It’s a city you will enjoy walking around with endless streets and bridges. There is no better way in exploring Venice than on foot. Should you get tired of walking there are water taxis to get you around. The main attractions are St Mark’s Square, the Rio Alto bridge and a ride in a real ‘Gondola’. 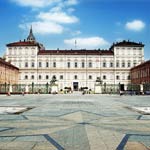 The capital of the Piedmont region, situated in north Italy, the city hosted the winter Olympics 2006. It is often called ‘Detroit of Italy’ as is it home to FIAT; the famous ‘slow food’ was born here; one of the world’s largest Egyptian antiquities collections is found here and of course the great football team Juventus. Turin and its surroundings have a lot to offer, everything from art, culture, cuisine, chocolate producers to cars, sport activities and much more. 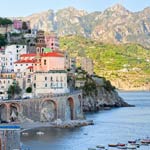 The Amalfi coast which starts from Sorrento, south of Naples up to the city of Amalfi, is a beautiful coastline which is UNESCO World Heritage site as a cultural landscape. Along the coast there are small former fishing villages, one of them is Positano with its extraordinary beauty and well known for its ‘Limoncello’ liqueur made of self-grown lemon trees. There are boat trips over to Capri island and Ischia island daily. 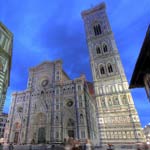 Is known as the city of art! Florence is a World Heritage site due to its artistic and architectural heritage, it has been ranked as one of the most beautiful cities in the world. You will find the famous Uffizi Galleries and Pitti Palace here, il ‘Duomo’, the bridge Ponte Vecchio and the well-known cathedral Santa Maria del Fiore. Florence is the most important city in Tuscany and one of the greatest wine growing regions in the world with the Chianti region just south of the city. 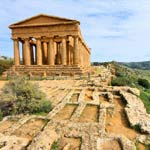 The largest island in the Mediterranean, separated from Italy by the narrow strait of Messina and with its landmark Mountain Etna – one of the most active volcanos in the world today. Sicily’s history is long and very diverse with Greek, Roman, Arab, Spanish and French influence before becoming a part of Italy in 1860.
The west coast with Palermo, Trapani, and Messina and east coast with Catania, Taormina and Giardini Naxos are very different from each other. The west coast has got more Arab influence while the east coast is more Roman. The island is known for is fertile soil and the main agricultural products are wheat, lemons, oranges, olives, olive oil and grapes to mention a few. Sicily is the third largest wine producer, well known for its Marsala wine and Nero d’Avola. The island has many visitors all year around due to its warm climate, cuisine, history and architecture.